“Via degli Dei” is one of the main tourist attractions of the Apennines: on foot or by bike a lot of lovers of nature and outdoor life travel through this piece of history that starts in Bologna and arrives in Florence, passing through Fiesole.

The route is 130 km long and connects Bologna to Florence, the average walking time varies from 4 to 6 days depending on the level of training, for those who prefer mountain biking the time drops to 2/3 days.

“Via degli Dei” starts from Piazza Maggiore through all the arcades of Bologna, and ends at Piazza della Signoria in Florence.

For all information we recommend that you visit the official website:
https://www.viadeglidei.it/

A bit of history…

On the ridge between Setta and Savena, the Etruscans traveled for at least 4 centuries an ancient road that connected Fiesole with Felsina, in order to develop their trade and promote their dominion over the Po Valley.

Then the Romans, having founded in 189 BC. the colony of Bononia on the remains of ancient Felsina, felt the need to ensure a connection with Arezzo and Rome through the Apennines: they built on the previous Etruscan route in 187 BC. with the consul Caio Flaminio a real trans-Apennine Roman road called Flaminia Militare.

Even in the Middle Ages, the habit of walking or horseback riding this ancient route was not lost, the easiest to cross this stretch of the Apennines. However, the Roman pavement soon fallen into disuse and submerged by vegetation was replaced by a simple path, a narrow mule track without paving, used by travelers who needed to travel this path.

“Via degli Dei”, a route created at the end of the 1980s by a group of hikers from Bologna, mainly follows these ancient paths and, between Monte Bastione and Monte di Fò, passes next to some valuable paving stones of the Roman road, now rediscovered.

Book a room in Fiesole

Single room with French bed, room equipped with all comforts for a welcoming holiday.

Modern and functional room, available with a double bed or two single beds. 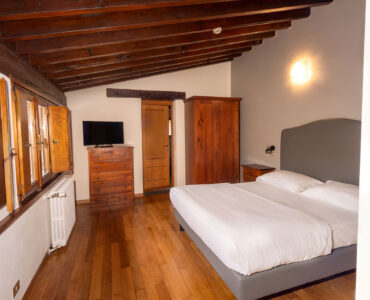 The Hotel Villa Bonelli is in a strategic position, located in Fiesole in the center of the charming town and is, at the same time, immersed in the greenery surrounded by the quiet hills of Fiesole. Read more Rooms

This site uses technical and analytical cookies for which it is not necessary to acquire specific consent. Furthermore, there may be other analytical and third-party profiling cookies, these will be active only after consent.
Cookie settings Refuse Accept all
Impostazione Cookie

This website uses cookies to offer the best possible user experience, they are stored in your browser and perform the function of recognizing you when you return to our website. More details on the Privacy e Cookie Policy page.
Technical and first-party cookies Always Enabled
Technical cookies are necessary for the proper functioning of this site and guarantee basic functionality and security features. First-party cookies collect statistical data anonymously.
Profiling
Any cookies that may not be particularly necessary for the website to function and is used specifically to collect user personal data via analytics, ads, other embedded contents are termed as non-necessary cookies.
SAVE & ACCEPT